For anyone who has been to Japan amongst the many experiences that will forvever change you is when you first taste sushi in Japan. Yes I know I’m coming across like some spolit old eotnian recalling his gap year – its a cliche but its true. Everything else is just a pale reflection of that Japanese sushi. As such for those living in be it London Paris New york there is that eternal quest for the mirror image and balance of that Japanese Sushi. Indeed for many lovers of sushi, they will go further perhaps having a fantasy of their dream sushi joint, I know I do in London where such place are so few and far between.  Well for many Sushi Tetsu will be that incarnation of many people’s dream joint.

Open for the last 6 weeks it has quietly been building a following amongst the blogerati who went as far as to refer to it in code as “Chicken cottage” – lest the secret get out. But then Jay Rayner who I imagine would have no truck with such sentiment blew the lid on the whole thing with a frankly glowing review last Sunday.

You now can’t get a table for weeks – sorry people its in Dabbous territory now.

Tucked away on a forgotten alleyway in Clerkenwell it is on first inspection an unassuming neighbourhood sushi joint. But such comparisons end there.

Tetsu is Toro’s nickname a play on the Kanji of his name, it means he tells us, “complete”. that is poignantly apt.

He is ex Nobu not that you’d know. This place is not Nobu yet there is the occasional nod here and there that betray the background; not perhaps as overtly as somewhere like Dinings, but it is there in the dabs of yuzu koshu that depart from the orthodox.

Sushi Tetsu is a small husband and wife set up with a 8 seat bar.  There are a few tables around the small room but no one ever sits in them. Its you Tetsu, his wife and anyone else at the bar.  The Japanese aesthetic is everywhere if you choose to look.

A pared back sushi experience then for the aesthetes out there. It is a million miles away from the other  new city based sushi joint – Sushi Samba that is loudly wooing Bankers and relieving them of their cash atop the Heron Tower.

For anyone with even a cursory knowledge of the Japan,  Sushi Tetsu offers a charm and subtelty that many have strived for but few have pulled off. The Japanophiles will swoon trust me.

The usual selections appear but anyone visiting would be better placed putting themselves in the hands of Tetsu, with the Omakase. At many places the Omakase or chef selection will give you the usual safe options here you feel there is real thought and sentiment behind the choice. We were the first to arrive,and asked what the chef sashimi was tonight? Sipping an ice tea,  he pondered the pristine selection of fish in his wooden box and told us he hadn’t quite decided yet – He was perhaps assessing our tastes. This told me everything I needed to know about this place. 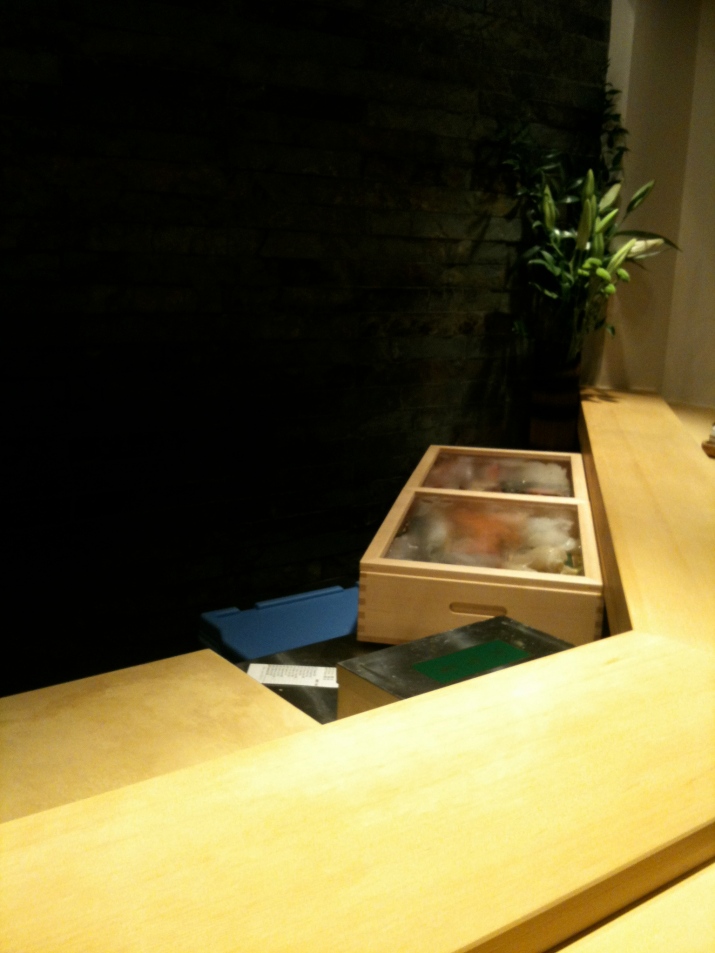 The highlights were without doubt the Omakase Sashimi a mix of Sea Bream, Tuna, Sweet Shrimp and marinated Horse Mackerel which was simply stunning.

Starting with the Sea bream  a single bamboo leaf is wiped, placed before you then wiped again. Then a small pile of ginger is placed on the leaf. The bream is given the smallest brush of soy / tare before being placed on the leaf. It is good very good. The merest hint of shiso under the bream adds a nice dimension  the rice well seasoned with vinegar. Yes, each piece of sushi is made before you and plated individually on that single bamboo leaf, the rice that right side of warm that afficinados crave.

The o toro fatty tuna was seared in front of us and we were instructed to eat it so quickly I didn’t have a chance to get a picture off – a recurring theme. 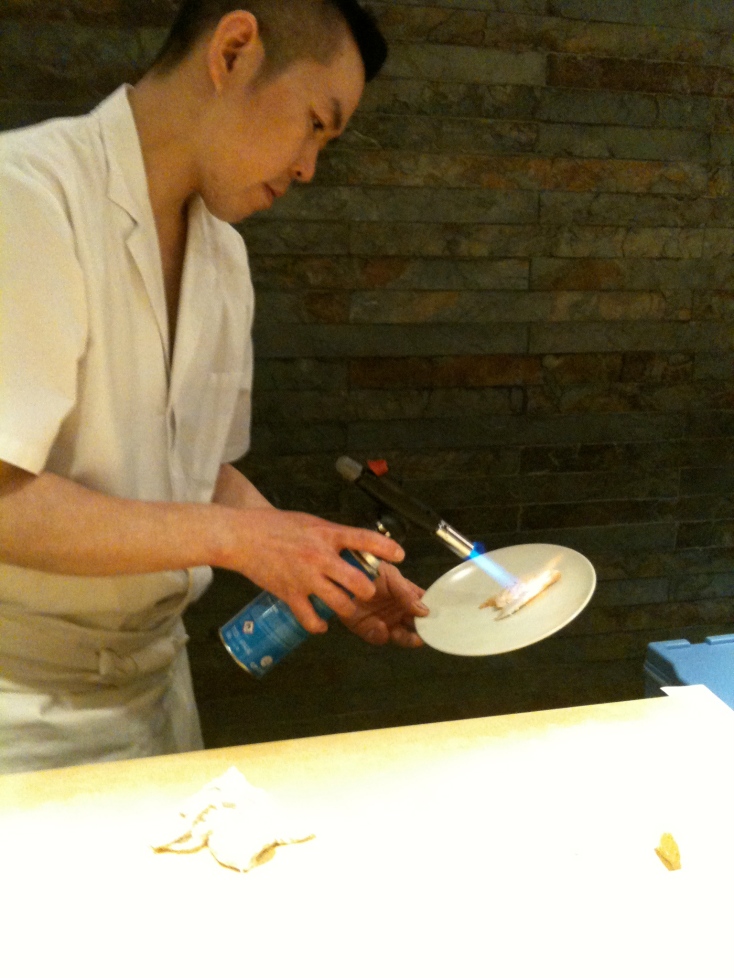 The eel surely the best in London, perhaps lasking the ethereal brilliance of that I once tasted in the Tsukiji Market but if you are an eel lover this is worth the trip alone.

The Razor Clam again got the blow torch treatment it was sweet and this time lifted by a dab of yuzu koshu an excellent piece of sushi. 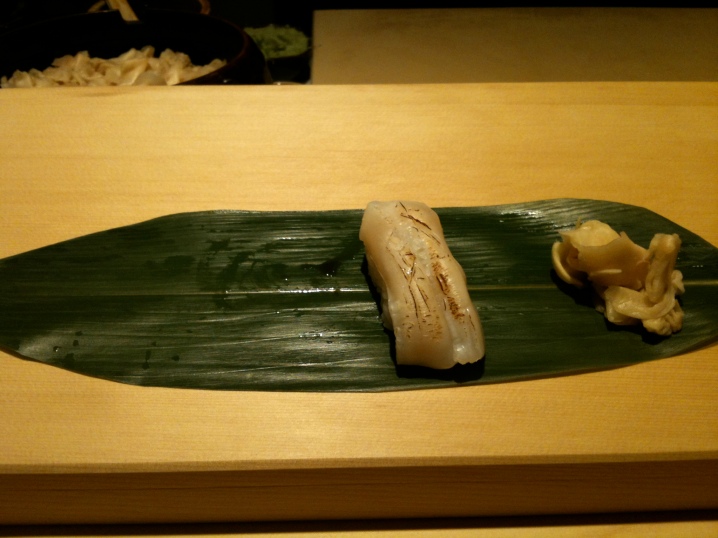 The maki rolls follow and are again very good

Of course there is a time and a place for the sushi of Nobu and Roka but occasionally I want a more unassuming sushi joint that is unhurried.With its focus on the freshest fish and sushi done well. This is where I’d choose to come. It is perhaps not the cheapest out there, but is without doubt among the best. Tetsu and his wife are charming, they have great pride in their restaurant and it shows, they make you feel totally welcome throughout.

So believe the hype its all true, it is a very special experience,  some may even say, one that is complete.